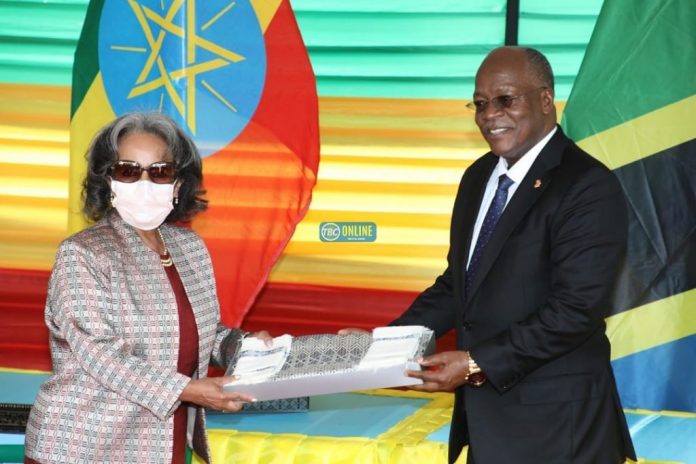 The trade volume between Tanzania and Ethiopia has tremendously gone up from 1.5bn/- to 13.5bn/- in 2012 to 2019 respectively, as the two nations look for increased business ties.

Foreign and East African Cooperation Minister Prof Palamagamba Kabudi revealed this yesterday, ahead of the visit of Ethiopian President Sahle-Work Zewde, who is expected to arrive today in Chato District, Geita Region, for official talks with President John Magufuli.

According to Prof Kabudi, Tanzania would capitalize on the visit to exchange experiences and boost trade and investment opportunities, especially on revitalizing the leather industry.

Ethiopia is Africa’s leading country with the largest livestock, making the Horn of Africa country the powerhouse and best destination for leather and meat factories.

According to the National Bureau of Statistics (NBS), Ethiopia leads with an overwhelming 60.39 million cattle, while Tanzania in the second position boasts of 33.9 million cattle.

Prof Kabudi noted that Tanzania and Ethiopia have opportunities to cooperate more on leather products.

“If you go to Ethiopia, you would be surprised seeing quality leather products produced by small factories; this is adding value to cattle skins. So, Tanzanians have opportunities to learn from them,” he stated, adding that the government would use this opportunity to invite investors in the leather industry.

Statistics indicate that the balance of trade between the two countries has increased from 946.8m/- in 2012 to 12bn/- in 2019, with Tanzania selling more to Ethiopia.

Prof Kabudi noted that the Tanzania Investment Centre (TIC) has registered a total of 13 projects worth 14.57 million US dollars from Ethiopia from 1990 to 2020.

The projects have created 677 jobs for Tanzanians in the manufacturing sector, works, transport, and tourism sectors.

Tanzania and Ethiopia have long good relations which started in the 1960s when the two countries were under the leadership of Mwalimu Julius Nyerere and Ethiopia’s Emperor Haile Sellasie.

The relationship dates back to 1963 when Tanzania opened its embassy in Ethiopia, after the formation of the Organisation of African Unity, the forerunner of the current African Union.

Ethiopia also opened its embassy in Tanzania in 2018 to cement the diplomatic relationship between the two countries. The countries also cooperate on tourism, works, security, industries as well as culture.

The Addis Ababa University in Ethiopia has signed a contract with the University of Dar es Salaam (UDSM) to teach Kiswahili.