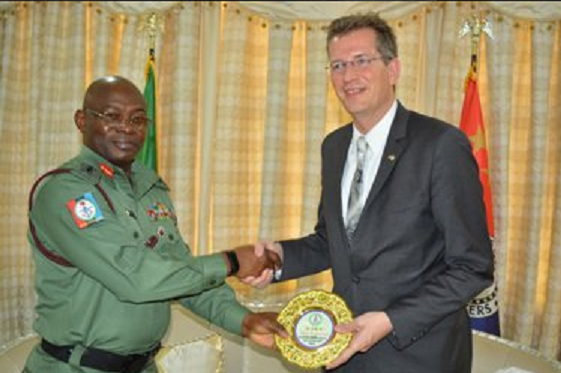 As part of efforts to boost German- Nigeria’s military relations, the German Deputy Defence Minister, Dr Ralf Brauksiepe has recently pledged his country’s total commitment to the Nigerian Armed Forces in their quest to defeat the violent terrorist group in country.
Brauksiepe disclosed this when he visited the Chief of Defence Staff (CDS) General Abayomi Gabriel Olonisakin at the Defence Headquarters, Abuja to further boost the German – Nigeria’s military bilateral relations.
While congratulating the CDS for the tremendous success recorded in the fight against Boko Haram insurgents in the North East of Nigeria, Dr Brauksiepe also observed that the Nigerian Armed Forces has displayed exceptional competence and professionalism in the fight against insurgents and criminal elements in line with global best practices.
The Deputy Defence Minister further expressed his country’s determination to explore avenues of common economic and security interest that may benefit both countries especially in the area of curbing sea piracy within the gulf of Guinea.
In his welcome address, General Olonisakin noted that the Nigerian military has over the years benefited a lot from the German Government through various military aids and therefore solicited for more support from the German Government in the area of provision of logistic support, intelligence gathering and technical assistance for the Multi-national Joint Task Force established to checkmate terrorists network in the West African sub-region. He said Nigerian military would no doubt continue to partner with German military on defence related matters to enhance the bilateral cooperation which has been in existence for over 5 decades.
The German Deputy Defence Minister was accompanied by the German Ambassador to Nigeria, the Defence Attachee, and some senior military officials from Berlin, while the CDS received the German delegation in company of his Principal Staff Officers.