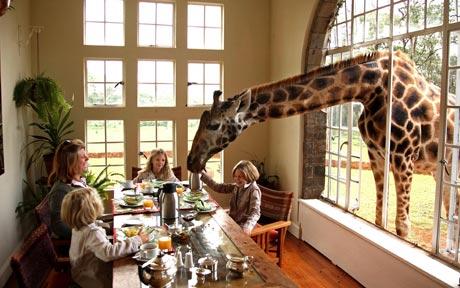 Tourism, the world over has gradually become a viable business venture as well as an avenue for the promotion of growth and development in countries of the world. The African continent with its vast tourism and hospitality potentials has not been left out of this trend. However, these potentials seem not to be harnessed in its full capacity.

Many nations of the world, which before now underestimated the gains of tourism, are now scrambling for a piece of the action in the international tourism industry. Foreign currency receipts from international tourism has since outstripped exports of petroleum products, or any other product or service, making tourism the world’s largest growing industry.

World records have it that in the mid 1990s, the tourism industry contributed to more than 6 percent of the value of all goods and services produced throughout the world. It also accounted for more than 7 percent of global capital investment and 13 percent of world consumer spending. Experts estimated that tourism supported more than 130 million jobs worldwide and contributed more than 5.6 percent to total tax payments.

As would be expected, many businesses are directly linked with the tourism industry through supply of goods and services for recreation and leisure activities of tourists. In addition to this, there are specific job opportunities that are directly linked with the tourism industry since it is a labour-intensive industry. But most forms of tourism are seasonal, as it is the case with cultural tourism. As a result, many tourism jobs are part-time, casual, low skilled and low paid. However, the large number of people that tourism employs coupled with its links with other industries makes governments to actively participate in the development of tourism resources.

Inadequate funding has been fingered as one of the major challenges faced in this sector. Tourism is being accorded low priority in the budgetary allocation and this greatly affects its development and management. This may not be unconnected with the fact that the agitation of the people towards tourism is so low.

In general, the attitude of most Africans towards recreation has been a poor one. Tourism is seen as a white man’s phenomenon and this affects the attitude of the people towards tourism and recreation. Only recently have people began to taste of and appreciate the necessity and immerse benefits attached to recreations and vacations across Africa.

Most of the tourist resources are located in the rural areas where the development and revitalization of tourism potentials is high. These areas makes it a viable venture and helps to improve the standard of living in the rural communities in which they exist since tourism is a large employer of labour having various direct and indirect activities linked with the industry. In many places, local communities have been reinvigorated by tourists’ interest in their arts, crafts or culture. Tourism has also exposed destinations in developing countries to the behaviour and values of visitors from foreign lands.

It is a known fact that investors will always think about profit just like every wise businessman. Most capital intensive business ventures take some years to recoup their invested capital before profit begins to turn in. Such is the case with the provision of lodging facilities like hotels especially in rural areas where patronage is expected mainly from tourists.

Even as hotel and resort operators are encouraged to provide something different and better than what exists on ground in terms of facilities and services, some have continued to keep up to standard. Tourist sites like Whispering Palms Hotel and Resort located in Badagry, Nigeria (West Africa), Durban beachfront in South Africa, Pyramids of Giza in Egypt, North Africa, Bamingui-Bangoran reserve in Central Africa, Lamu Island in East Africa, and many others have continued to cater for the needs of millions of people annually, and have attracted tourists from other continents. Not only do they tell the African story, carrying relics of historical events, they also add value to the economy. On the part of the government, publicity, good road networking and encouragement of local side attractions and creation of game centres are some of the expected contributions that should be considered. In addition, the government should be able to grant soft loans to private investors.

As a tool for job creation, youths can be encouraged to explore side attractions. Side attractions stem from performances from traditional dance troupes and artistes. The dance troupes have ways of promoting the culture of the state while at the same time making a living through their performances. Earnings could be made during their performances even at tourist centres. During festive periods, musicians can organize musical concerts, which provide seasonal employment for some people. The government can work to coordinate such entertainment at the festive periods. Institutions such as Research Centres, Museums and Libraries can also assist in provide jobs for people in both rural and urban centres within host states.

School and organizations should include excursion into their curriculums and work plans in order to harness these opportunities. Tourist’s guides could be very helpful during excursions. Increase in the number of tourism related trips like excursions would increase patronage, which will increase income from tourism related businesses that will in turn provide more employment for the people.