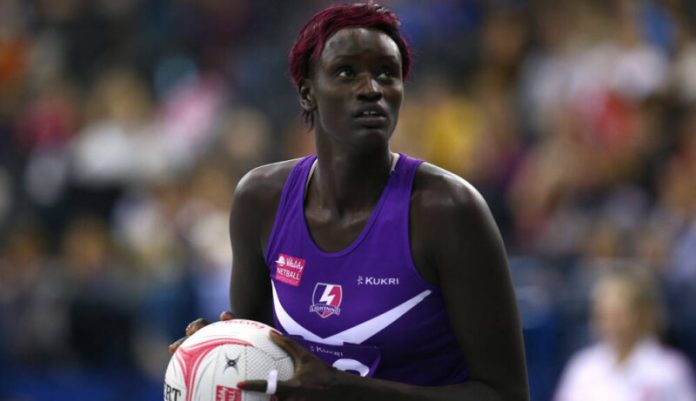 23-year-old Mary Cholhok has become the second professional netball player from the east African country Uganda. She hopes her story will inspire other young African girls to pursue their dreams.

Mary, originally a native of South Sudan moved to Uganda with her family after the death of her father during the civil war in Sudan.

Mary, who grew to a height of 6ft 7in, quickly discovered she had a natural talent in netball. She looked to develop her talent further, believing that a netball career would offer a path to a better life. However, her uncle and mother would need more convincing.

“They weren’t pleased about it, they just felt like it would distract me, my grades would drop down, so they were a little bit very harsh about it. Sometimes I would have to sneak out to play and try to balance both.

“At certain points, someone discovers what they do best, at a certain age or level, so I decided to stay in the sport because I felt like I had an opportunity to get a scholarship through sports.”

Her dream of becoming a professional netball player looked to be over when she became pregnant while in high school. On the contrary, the birth of her son Yasson made her more determined to become successful.

“Having a kid, I was 20 years old, and it felt like… wow it was tough. So I had to take the step up, to become responsible, become a mother now, and also try to look out for his future.

“Some people would be like, ‘Oh, you need to be with your son, take care of him’, but if I stay, and if I don’t get my degree if I don’t get my netball career or achieve something better, what would I show him? Like, ‘Son, I sacrificed this to get this’.”

All her efforts and sacrifice are paying off. She finished as the top goalscorer in her debut league season and went ahead to play in her first-ever World Cup last year.

Due to Covid-19, this year’s Superleague season has been voided just four weeks into the season.

Afraid of contracting the virus in Uganda, Mary decided to remain in England. However, this decision may imply that she will not see her son until the end of 2021’s netball season.

“It was quite emotional for me to be in lockdown alone,” she says. “I took time, thinking I had coronavirus when I didn’t. At that point, everyone was still confused, and so was I.

“It was quite a bit of a letdown to him because he is constantly like, ‘Mum, when are you coming? We’re going to do this, and that, and that’. That was quite emotional for me as a mother.”

Their sense of duty and passion has led them to participate in programs that offer solutions to people most affected by climate change. In 2019, they visited Sierra Leone where they meet with farmers who have been affected because of the Ebola epidemic.

“These farmers are probably the least contributors to the climate change problem but are yet being affected the most,” said Sabrina.

“This demand, which we saw go up with the pandemic, has always been an almost unreal demand. Food waste is no secret issue in the West and the North”.