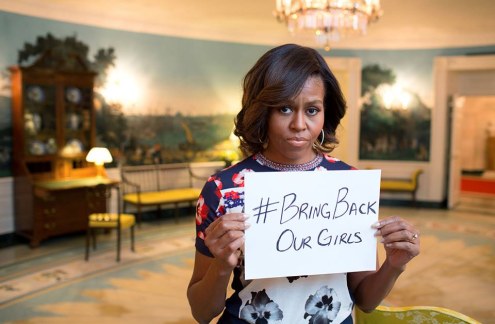 The build-up of an international coalition ready to assist Nigeria in locating and rescuing the more than 200 schoolgirls abducted in Chibok, Borno State by Boko Haram terrorists three weeks ago got a boost, yesterday, as France and China and Canada joined the United States and the United Kingdom in the search and rescue operation.

Both the US and the UK had earlier given their word to President Goodluck Jonathan to assist Nigeria.

The abduction of the girls had triggered series of protests across Nigeria and in some other countries, with protesters demanding that world leaders should take drastic actions to rescue the girls. The Twitter hash-tag,’#BringBackOurGirls’, put together to push the rescue of the girls, is trending globally, with prominent world leaders lending their voice and support to the demand for their freedom.

France, yesterday, offered to send security service agents to Nigeria to help recover the abducted girls. Reuters quoted French Foreign Minister, Laurent Fabius as telling French lawmakers that “the President has instructed that we put the intelligence services at the disposal of Nigeria and neighbouring countries. This morning he asked us to contact the Nigerian President to tell him that a specialised unit with all the means we have in the region was at the disposal of Nigeria to help find and recover these young girls.”

He added: “In the face of such ignominy, France must react. This crime cannot be left unpunished,” Fabius said.

With more than 4,000 troops operating between Mali to the west and Central African Republic to the east, Paris has a major interest in preventing Nigeria’s security situation from deteriorating, having previously voiced concerns that Boko Haram could spread further north into the Sahel.

The Peoples’ Republic of China has also offered to assist in the effort to rescue the abducted girls. Special Adviser to the President on Media and Publicity, Dr Reuben Abati in a statement, yesterday, said Chinese Premier, Li Keqiang conveyed the assurance of China to President Jonathan yesterday. According to the statement, “in talks with President Jonathan earlier today, Premier Li Keqiang promised that his country will make any useful information acquired by its satellites and intelligence services available to Nigeria’s security agencies.

“Mr. Keqiang assured the President that China will support Nigeria’s fight against terrorism in every possible way, including the training of military personnel for anti-insurgency operations”.

Canada on its part will supply surveillance equipment to help Nigeria find the girls.

According to Jason MacDonald, a spokesman for Prime Minister Stephen Harper, in an e-mail, “Canada will provide surveillance equipment and the technical expertise to operate it.”

MacDonald was responding to an earlier report that the Jonathan government had asked Canada to provide surveillance equipment in the wake of the kidnap by the Boko Haram terrorists. Canada’s Foreign Affairs Minister, John Baird had also said, “we’ve offered support to the Nigerian government. If Canada has surveillance equipment that is not in the region that could provide assistance to find these young girls, we’d obviously be pleased to provide it.”

Meanwhile, the US Pentagon is sending no fewer than 10 military troops to Nigeria as part of the U.S. effort to help find the kidnapped girls. A Pentagon spokesman said officials have no plans now to launch any military operations. Pentagon spokesman Col. Steve Warren said the troops will be arriving in a few days as part of the larger U.S. assistance team to include State Department and Justice Department personnel. The military members will help with communications, logistics and intelligence planning.

Meanwhile, the Nigeria Police Force, yesterday, announced a mouth-watering cash reward of N50 million to anyone who volunteered credible information that could lead to the rescue of the over 200 girls of Government Girls Secondary School, Chibok, Borno State, abducted recently by Boko Haram insurgents.

It assured all citizens that any information given would be treated anonymously and with utmost confidentiality.

The Force urged all patriotic citizens with such useful information to contact the following numbers:

The Defence Headquarters has also assured protesters from different parts of the country that it was treating the issue of the abduction of the girls as a special test case, pointing out that the military was committed to bringing back the girls.

Director, Defence Information, Major-General Chris Olukolade, made the disclosure to the media and scores of protesters after a closed door meeting between selected leaders of a protest group that stormed DHQ and top officers of Defence headquarters.

According to Olukolade, the “Nigerian military is freshly committed to finding the girls.

“Let me assure the Nigerian public that the best will be done to bring back our girls safe and alive. Please, keep supporting us, keep praying along. We will get results very soon.”

One of the leaders of the protesting group, Dr Jibrin Ibrahim, in his response, said: “The key outcome of the interaction we had is that the priority for this nation, for the military and for us, the civil society is to bring back our girls.

“They have committed to intensifying their efforts, but above all to produce results in the shortest possible time. They have briefed us fully about the activities they have engaged in, a lot of which we do not want to reveal in the open.

“I want to assure you that the very clear message we got from them is that their engagement is serious, is being escalated and is focused on the objective of bringing back our girls alive and safe.”

Meantime, the Northern Christian Association of Nigeria has accused the Borno State Governor, Alhaji Kashim Shettima and the authorities of Government Girl Secondary School in Chibok Local Government Area of Borno State of conspiracy against the abducted girls and the people of Nigeria.

A statement jointly signed by the Secretary-General and the Public Relations Officer of the Association, Prof. Daniel Babayi and Elder Sunday Oibe respectively, in Abuja, also demanded explanation from Governor Shettima to some issues it raised.

The body maintained that the abandonment of the abducted girls was a confirmation of the persecution Christians in the North had been suffering from authorities of various states in the region, accusing the state government of playing politics with the lives of Nigerians.

They said: “The Governor and government of Borno State should and must, as a matter of urgency, stop playing politics with the lives of the children of other people. They should produce those children without delay because they know their whereabouts.

“We demand an explanation from the Governor, Commissioner for Education, Principal and CSO of the school on what they did and what they did not do that led to the ferrying away of these innocent children who went to sit for an examination for the betterment of their tomorrow.

“We also demand that the Federal Government and the international community should help us beg the Governor of Borno State to do everything within his powers to produce these children.”

“We also reject a situation where they will turn our daughters to sex slaves of these criminals called Boko Haram members. We have it on good authority that some of these children are being raped 15 times a day.

“Borno State government should be reminded that the fundamental human rights of these people should be respected and protected.

“The Governor should provide immediate explanation because we know that some people want to sacrifice these children on the altar of politics.”

There is a limit to which Christians would tolerate all these abnormalities.

“We suspect a conspiracy among all of these characters including the Governor, Commissioner for Education, Principal and CSO since none of the daughters of the teachers and Principal were abducted.”

Northern CAN also demanded explanation to some questions it raised after much deliberation on the matter.

The statement continued “It may interest Nigerians to know that we have fundamental questions which demand one million answers:

“Since the abduction of these girls over two weeks ago, has Borno State Governor, Alhaji Kashim Shettima, constituted any panel of investigation with a view to making its report public?

“How did the 353 female students disappear from the school into the thin air?

“Why did the Borno State Commissioner for Education, Principal, Vice-Principal and Chief Security Officer, all Muslims, ignore the valid advice of WAEC on the security implication of writing exams in the school and the need to have a centre where the children’s life will be secured?

“How did Boko Haram carry over 200 students and their food stolen by these criminals from the school? Was it carried with trailer?

“Why is it that since this issue came up, no single photograph of the abducted children was made public by the school authorities? After all, they were preparing for exams and may have submitted their photographs.”Where were the daughters of the Principal, Vice Principal and Chief Security Officer when the abduction took place?

“So these are the questions; we have done our investigations, we are begging the international community, we are begging the Federal Government of Nigeria and the press to ask these legitimate questions from the Governor, Commissioner for Education, Principal and CSO of the school because Chibok is a predominantly Christian area.

“What we are after is the safety and future of these children, whether they are Christians or Muslims or our enemies doesn’t matter. They are Nigerians, first and foremost.”