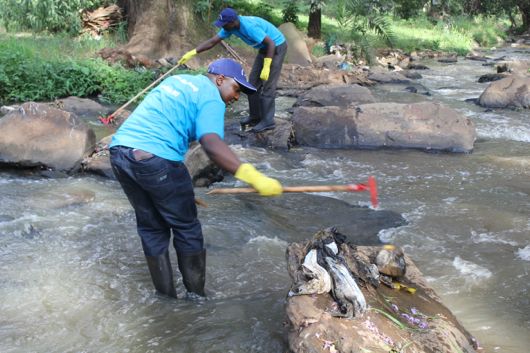 A clean-up process has begun in the capital city of Kenya with efforts to revive the heavily polluted Nairobi River.

The National Environment Management Authority (NEMA) who is in charge of the clean-up exercise will be conducting inspections across the city, and is also set to shut down premises that do not comply with the relevant regulations such as riparian reserves, waste management and disposal among others.

The clean-up exercise is an order from the Presidency charging NEMA to take up responsibilities as regards controlling discharge and waste disposal as part of the cleanup of Nairobi River.

“Following a presidential directive regarding the regeneration of Nairobi city, Nema under the Ministry of Environment and Forestry has been tasked with the duty of spearheading the compliance and enforcement of effluent discharge and waste disposal in support of the cleanup of the Nairobi River,” read part of a statement released by the authority.

The inspection that started on April 16 will focus on slums, businesses, residences and slaughter houses near the river.

Areas which will be under surveillance inlude, Dagoretti, Kawangware, Karen (Nairobi Dam), Kirichwa (Kubwa and Ndogo), Mater and Kiamaiko.