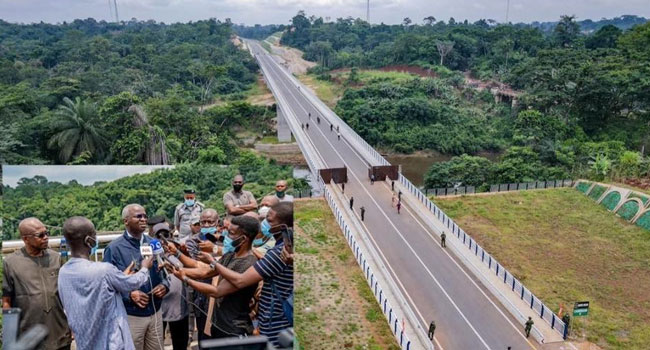 Nigeria’s Minister of Works and Housing, Mr. Babatunde Fashola, has announced that the inauguration of the border bridge at Mfum, and the Ikom bridge, between Nigeria and Cameroon will facilitate international trade between both countries.

Fashola disclosed this at an inspection of the two-lane bridge located at the new border between Cameroon and Nigeria at Ekok/Mfum, and the new Ikom bridge. He explained that the strategy of the current administration in planning and executing infrastructure projects was yielding results through successful completion.

“This is the A-4 axis coming from Calabar to Maiduguri through Ogoja to Katsina-Ala. So you will expect more volume of trade. And it is no accident that Cross River State bears its name, as it is actually the river that named the state. That River opens to the sea and the Gulf of Guinea. And so high impact on international trade is expected” he said.

He commented on Nigeria’s strong relationship with Cameroon in trade and business, citing Aba, Enugu and Abakaliki as places given access to by the route facilitating transaction in agro produce, merchandise and manufactured goods. He called it a strategic infrastructure to take Nigeria to the future for many more decades to strengthen the bond of relationship in joint development with the Republic of Cameroon and Nigeria.

In addition, Fashola noted that the bridges would facilitate the creation of hundreds of jobs, better movement of agro produce and manufactured goods, and security efficiency via a joint border patrol. This will position both nations to take the benefit of the free trade zone agreement.