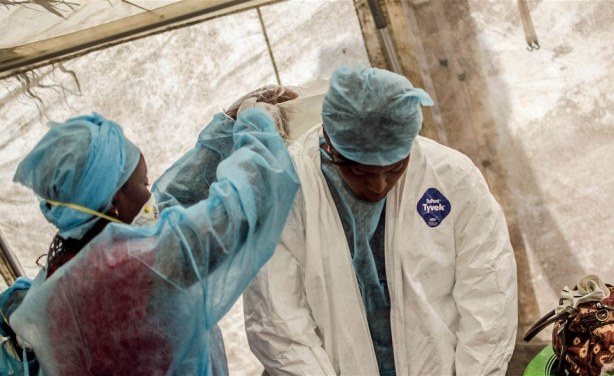 Nigeria appears to have successfully contained its Ebola outbreak and the response model has become a reference point to other affected countries.

Mr. Chukwu spoke to the News Agency of Nigeria, NAN, about the new plan while reacting to a recent request by the United Nations and the World Health Organization, WHO, to offer the training as part of efforts to combat the disease.

“Nigeria will offer specialised training to the health personnel from the three severely affected West African nations of Guinea, Sierra Leone and Liberia,” he said.

According to him, the trainees comprised nine field epidemiologists and six laboratory scientists selected from the affected countries.

The minister said the training, scheduled to take place in Nigeria, would last for three weeks.

Mr. Chukwu, however, did not disclose when the training would commence.

He said that the move was part of a broader measure taken by the Nigerian government to assist countries hit by the virus to contain its spread beyond their borders.

“It is our belief that unless the virus is contained in the most affected countries, Nigeria will continue to be at risk because of its policy of non-restriction of movement across the sub-region,” he said.

“I believe that Nigeria should help its neighbours to contain the scourge.

“But for now, we are focusing on helping to build the capacity of the health workers in those countries at our own cost.

“So, Nigeria will not rest until Ebola virus is completely tackled in West Africa,” he said.

Mr. Chukwu said on the long-run, countries around the sub-region would be encouraged to train more of its health workers using Nigerian facilities to build a stronger network against common diseases.

The minister said the Federal Government was also planning “a more comprehensive Masters programme for health personnel from countries in the sub-region that could last for up to two years”.

He said the effort was geared towards building the sub-region’s capacity to contain deadly diseases such as EVD, HIV and Lassa fever.

Besides, he said the federal government had procured drugs worth N50 million to be donated to Sierra Leone as part of Nigeria’s contribution to curbing Ebola virus in that country.

Mr. Chukwu said Nigeria had also outlined a comprehensive programme to help its neighbours to successfully fight the disease.

The minister expressed optimism that West Africa could stem the tide of EVD within the shortest possible time, especially if countries were committed to the sub-regional’s plan of action against the disease.

“Ebola virus in West Africa can be brought under control within the next six to seven months, if all countries in the sub-region work in unison,” Mr. Chukwu said.

The minister also called on the countries still plagued by Ebola virus to develop a strong communication and social mobilisation network to help build public confidence.

He said most people in the affected countries were antagonistic to their governments’ efforts toward ending the scourge because they have nothing to eat in their homes.

“We need to look at the humanitarian aspect of the problem such as food supply.

“You cannot be talking about Ebola virus when people are hungry. So, the campaign has to be a complete package, otherwise it may not yield the desired results,” he said.