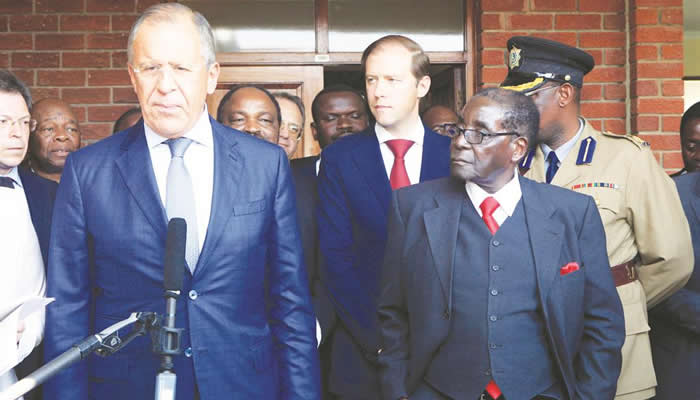 ZIMBABWE and Russia yesterday commissioned a historic $3 billion platinum mining project in Darwendale that is expected to stimulate growth in various sectors of the economy over the next few years.This is the biggest joint venture Government has entered with a foreign investor in the history of independent Zimbabwe, with nearly a million ounces of platinum expected to be produced annually, while thousands of jobs would be created.

The Russians have already secured funding for the project and drilling is ongoing with Zimbabwe availing swathes of land with vast platinum deposits.

The joint venture, Great Dyke Investments,is between the Zimbabwe Mining Development Corporation and a Russian consortium made up of three corporations, including a national bank.

The corporations are VI Holdings, Rostec, a technology partner and Vnesheconombank, the financier.

Investment levels are expected to reach $4,2 billion over the next 10 years as there are plans to set up a refinery to promote value-addition, which is a key pillar of Zim-Asset, the Government economic blueprint.

During the commissioning of the project, three agreements were signed, with the first being the inter-governmental agreement on co-operation in the implementation of the project, which was signed by Foreign Affairs Minister Simbarashe Mumbengegwi and Russian Minister of Industry and Trade Mr Denis Manturov.

Also signed was the financing agreement for Darwendale project, signed between Afromet and VB Bank and another agreement on staff training between Great Dyke Investments and Russia University of Science and Technology.

The project, launched in the presence of President Mugabe, Cabinet Ministers, diplomats traditional leaders, legislators and Russian senior Government officials and businesspersons, would be implemented in three phases.

The first phase will run from 2014-2017 and will see the exploration and infrastructure establishment as well as construction and commissioning of the first stage of facilities for mining being carried out.

During the second phase (2018-2021) there will be construction and commissioning of two underground mines and the second processing plant with additional mines being constructed in the third stage (2022-2024).

Great Dyke Investments board chairperson Dr Hesphina Rukato, said the launch of the project marked the fruition of a vision started in 2006 but had been stalled because of lack of funding.

“Between 2013 and 2014, new shareholders came on board and previous geological data was restored, reanalysed and confirmed,” she said.

“In line with Zimbabwe’s policy of value-addition and beneficiation, as expounded in the country’s economic blueprint Zim-Asset, it is planned that a refinery will be established so that value is added in country. This project has the potential to contribute significantly to the socio-economic landscape of Zimbabwe.”

She added: “Additional benefits will be realised in service sectors such as technological transfer and skills development, education, health as well as development of infrastructure.”

President Mugabe said the “historical act” would turn around the fortunes of the Zimbabwean economy.

“It will see us rise as a nation and will see our performance, socio-economic, also rise as greater development takes place with greater addition and beneficiation of our natural resources,” he said.

“We couldn’t do it with enemies, No, we can only do with our friends so hand in hand, heart to heart we shall succeed.”

He thanked President Putin and the people of Russia for standing by Zimbabwe against Western onslaught and for their commitment to strengthening the existing bilateral relations.

“It is a message we reciprocate and say yes, yesterday you were our good friends you helped us to become what we are–an independent people,” President Mugabe said.

“And today you have proved once again that your act, historical yesterday, has once again demonstrated that you still are one of our greatest friends in the world and we reciprocate by saying small though we are, our heart is as large as your own.

“Small though we are, our thoughts and beliefs are as good as your own. Small though we are, our dedication and commitment to the revolution, ideas and objectives of the revolution of yesterday that commitment continues. We are sure as a Government of the people, a Government which is custodian of the natural resources that belong to the people that we would want to see exploited in the interest of the people, exploited in partnership with those who are like ourselves.

“I am very gratified on this occasion that the visit of the Russian Foreign Minister took place to Zimbabwe and we had a very rich discussion with the President of Zimbabwe and my colleague minister of Foreign Affairs of Zimbabwe reiterating our resolve to provide all political support for promoting trade and economic investment cooperation between our countries (and) to promote human and cultural cooperation including cooperation in the field of education where not only the Russian government provides scholarship to Zimbabwean citizens but also Russian companies are joining the process and participate in financing the training of Zimbabweans who will be working on this and many other joint ventures.”