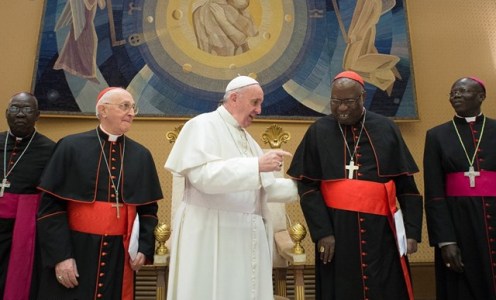 The head of Roman Catholic Church, Pope Francis, has expressed interested to visit South Sudan as part of efforts to bring its two leaders together, and make them work together for peace and prosperity, a bishop who met the Pope has recently said.
Roko Taban Musa, the Apostolic Administrator of the Catholic Diocese of Malakal, told local radio station in Juba that Pope Francis informed the bishops from Sudan and South Sudan during their recent meeting in Rome, that the Holy Father wanted to meet President Salva Kiir and first vice president designate, Riek Machar.
“The Pope is updated about the situation both in Sudan and South Sudan. He knows what is happening,” Musa told Eye Radio in an interview on Monday evening.
“He told us (the bishops) that he wanted to visit South Sudan clearly but he did not give us the time. He told us he is trying to work out the possibility of meeting [President] Salva Kiir once again and Dr. Riek Machar,” Musa added.
Pope Francis met President Kiir for 15 minutes last year in Kampala, Uganda. The brief encounter was arranged by the Ugandan President, Yoweri Museveni, a regional ally who sent his forces to fight Machar’s opposition for two years.
South Sudan has a substantial number of Roman Catholic followers. President Kiir too is a Catholic.
Musa, who met Pope Francis with other bishops from Sudan and South Sudan, said the Vatican will announce the date of Pope’s visit, which he said is significant.
“As a man of supreme moral authority in the world, the Pope will be able to play a great role in bringing together, not only in bringing together the two men, but making the two men work together for peace, for prosperity and for freedom in this country,” he said.
Although the date for the visit has not been fixed, issues such as security in the capital will be put into consideration. 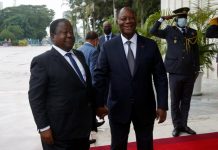