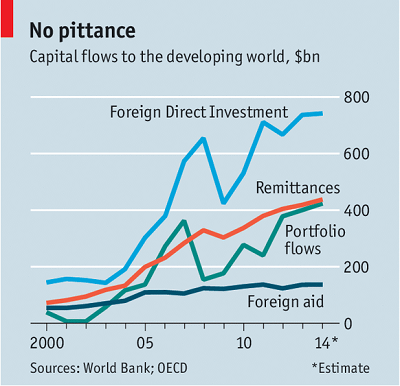 The forces of globalization and migration have become particularly potent on the global economic scene in the last two decades and they don’t appear to be slowing down. Globalization despite all its shortcomings, improves foreign direct investments, boosts the transfer of technical expertise, and enhances human capital development. Migration despite all clamor against its tendency to engender stress on social amenities, helps to sustain economic growth in host countries and bolsters remittances in the countries of origin.

In 2015, global remittances to developing countries were estimated at $440B, the number dropped 2.4% to $429 billion in 2016. Economists estimate that remittances might have grown by 3.3% to $444 billion in2017. In fact, remittances to Africa has outpaced foreign aid, since the year 2000 (see chart below) a sign of improving economic prospects in Africa. 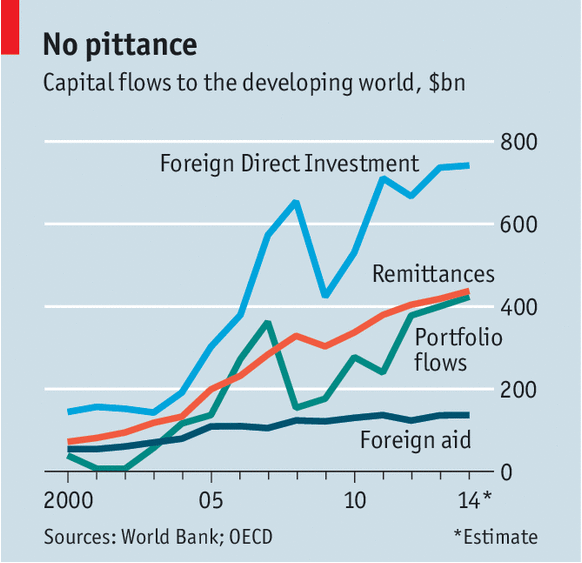 However, many African governments tend to underplay or ignore the role that remittances play in their local economies and in the GDP growth of their countries. This piece looks at how remittances are making a difference on the global economy with a special focus on their impact on the economies of the African continent.

The effects of Remittance on originating economies

Remittances increase the economic power of recipient families to boost their economic consumptions. South African families that receive remittances from families abroad tend to have more disposable income and they spend significantly more than average on food, shelter and clothing. An increase in spending power in turns helps people to upgrade their standard of living and get on a faster track out of the poverty trap and its attendant woes.

Remittances help to boost investments in human capital development– often beyond the level of the capacity building efforts of the government. Families that receive remittances tend to spend a disproportionately large part of such income on education than from other income. Families that receive remittances are more likely send their kids to better schools, invest more in girl-child education, and pursue more education beyond high school.

Remittances also help to boost the local economic base by serving as startup funding and expansion capital for local businesses and SMEs. Many people who send money to families back at home encourage the setting up of businesses in agriculture, real estate, and trading among others. Such business investments in turn help the families to increase their sources of income and build more wealth. Such businesses also hire workers to reduce the prevalent unemployment and they provide income to the government in form of taxes and levies.

Threats to remittances and its impact on African economies

One of the biggest challenges facing migrants in transferring home for the improvement of the standard of living for the people back at home is the high cost of remittances. After working multiple odd jobs, braving the winter cold at ungodly hours, it can be disheartening to pay huge transaction costs to banks just to send money back home.

The World Bank notes that “the global average cost of sending $200 remained flat at 7.45 percent in the first quarter of 2017” whereas economists submit that Sustainable Development Goal (SDG) target of 3% is essential to keep the impact of remittances. In sub-Saharan Africa, the costs of sending remittances could be as high as 9.8% making the region the highest cost region.

Thankfully, people abroad who are to relatives back in Africa now have options and they don’t have to bear the high costs imposed traditional financial institutions. When transferring money to South Africa, you may want to read reviews and patronize some recommended companies who facilitate international transfers at a lower cost and at a faster pace than local banks.

It is important of the good of the African continent that governments start taking proactive measure to ensure that the flow of remittances from abroad continues unhindered. Rita Ramalho, Acting Director of the World Bank’s Global Indicators Group notes that “Remittances are an important source of income for millions of families in developing countries. As such, a weakening of remittance flows can have a serious impact on the ability of families to get health care, education or proper nutrition,”