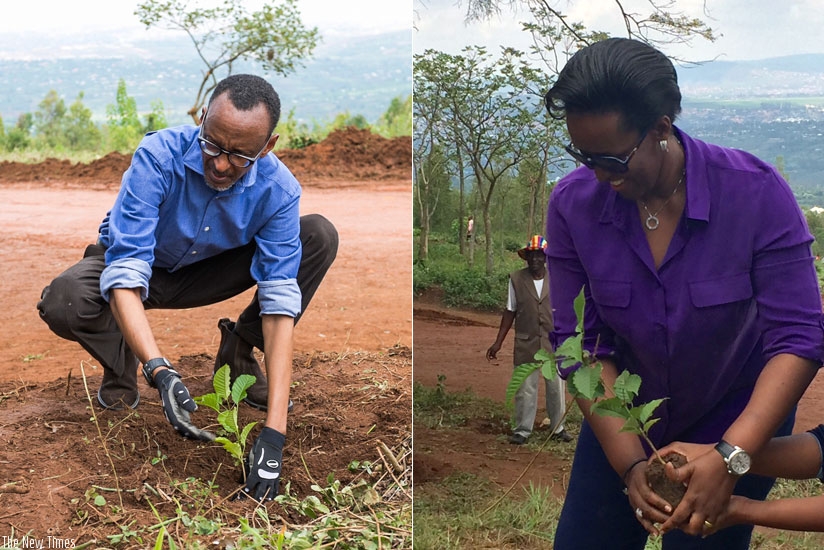 Bank of Kigali says it will invest part of its annual operations budget in supporting efforts by a local non-profit environmental conservation organisation to plant one million trees in Nyagatare District as part of activities to mark 50 years, this December, since it was incorporated in 1966.

“Our Board, Management and staff understand that climate change is real and as a socially responsible organisation, we are taking a position at the frontline in the battle to conserve the environment,” Dr Diane Karusisi Bank of Kigali’s Chief Executive Officer told the media at the Bank’s headquarters in Kigali, yesterday.

The bank’s announcement is expected to excite the country’s environment conservationists and probably inspire more corporate involvement in efforts to avert negative effects of climate change on local communities.

Bank of Kigali’s efforts will kick off with the planting of more than 150, 000 trees over the next three years through a partnership with Compagnie Agricole Environment Association (CAE), a local non-profit organisation with which a memorandum of understanding was signed.

“Today we are in this boardroom but come September, we shall be in the fields for the first phase of planting of over 50, 000 trees with more to be planted subsequently,” said Dr Karusisi.

Jean Batiste Mutabaruka, CAE’s Principal, said his organisation plans to plant one million trees in Kahi Cell, Karangazi Sector in Nyagatare District and said the partnership with Bank of Kigali will boost chances of achieving that target.

“We are delighted that Bank of Kigali, as an industry leader, is setting the precedent of supporting noble local causes like ours, to conserve the environment in which the communities, with which they work, actually live,” said Mutabaruka.

In December, Bank of Kigali will mark 50 years since it was incorporated in 1966 and tree planting is among the Corporate Social Responsibility (CSR) activities that have been chosen to celebrate the milestone as well as give back to the communities in which the bank has thrived, BK officials say.

Dr Shivon Byamukama, the Bank’s Head of Corporate Affairs, said the bank is committed to transforming lives of Rwandans through giving back to the community and currently devotes 1 per cent of the annual operating budget to Corporate Social Responsibility.

Bank of Kigali was incorporated on December 22, 1966 and is among the key symbols of Rwandan resilience in the country’s turbulent history that climaxed with the 1994 Genocide against the Tutsi that claimed the lives of over a million people.

Over the last five decades, the bank has enjoyed impressive growth across all major performance indicators and is Rwanda’s largest, by Total Assets, with 33.0 per cent of the market share as of March 2016.

The bank says it is proud to use its position as a corporate leader in the banking industry to address some of the prevalent issues that are affecting communities in which businesses operate.

For instance, the bank’s intervention in tree planting efforts is informed by recent environmental research that indicates that worldwide consumption of paper has risen by 400 per cent in the past 40 years and 90 per cent of all manufactured paper is made from trees.

In Rwanda, the importance of trees can’t be over emphasised, especially with recent cases of flooding and landslides that have claimed dozens of lives and destroyed property.

According to a 2007 national forest inventory, illegal tree cutting, especially for charcoal burning, was identified as the leading threat to Rwanda’s trees contributing 78.3 per cent.

It is such statistics against the environment that Bank of Kigali says it wants to help overturn.

“In 2010, the bank introduced electronic-based bank statements and use of electronic channels such as mobile and internet banking for the customers to access their accounts without having to print statements, hence saving paper. We want to take a step further by planting trees,” said Dr Karusisi.

She added that by planting trees, “we are not only conserving the environment but also saving lives because the negative consequences of deforestation, such as irregular rainfall patterns and global warming, actually affect businesses and our customers.”

Currently, over 60 per cent of Bank of Kigali’s banking services are technology delivered and the bank’s strategy is to enhance the use of technology in offering its services, according to officials.

Rwanda has committed to increase the national forest cover to 30 per cent of the total land area by 2018.

It is estimated that over 1.6 billion people globally rely on benefits that forests offer, including food; unfortunately, an estimated 13 million hectares of forests, for instance, were lost each year between 2000 and 2010 due to deforestation.