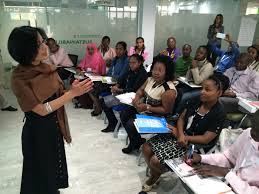 More than Rwf91 million was recently raised during a fundraising drive for the construction of women leadership centre of excellence in Gahanga sector, Kicukiro District. The total cost of the construction is estimated at more than Rwf3.6billion.
Pro-Femme Twese Hamwe, an umbrella organisation of women associations is spearheading the project through mobilisation of resources locally and internationally.
Speaking at the event, Jeanne D’ Arc Kanakuze, Chairperson for Pro-Femmes Twese Hamwe, said the leadership centre will not only be beneficial to Rwandans but also the region as a whole.
She said by the end of May an administration block of the complex will have been completed.
“Women leadership centre is for learning and documentation for both local people and foreigners. The centre of excellence seeks to boost the development of women in Rwanda and beyond,” she said.
At the same event, Chairperson of Transparency International Rwanda, Marie Immaculée Ingabire, said women today can be relied on unlike in the past when their abilities were underestimated.
This was echoed by Oda Gasinzigwa, the Minister for Gender and family promotion.
“Women empowerment and self-reliance is the foundation of a country’s development. We should all join hands to support women’s projects for sustainable development.”
RwandAir, CIMERWA, I&M Bank, various Women associations, UAP, Pan African Bank, Access Bank, Transparency International Rwanda, New faces new voices, Akagera Business group among other organisations and individuals contributed during the event.
The centre will have different sections, including one for gender and family promotion activities, training and learning centre as well as apartments, conference rooms, entertainment and business activities to generate money for women’s economic transformation.
The event which held at Serena Hotel Kigali attracted various government officials, civil society and the private sector.