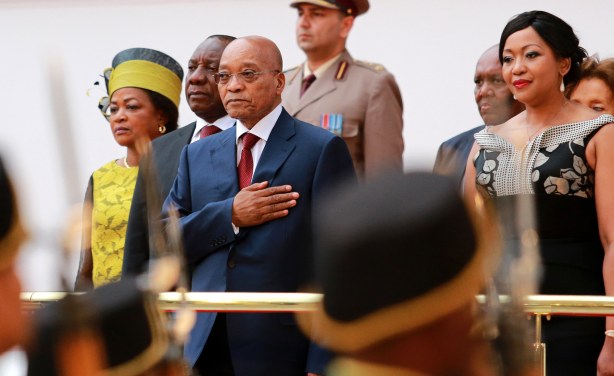 DA parliamentary leader Mmusi Maimane on Tuesday accused President Jacob Zuma of “breaking Parliament” by letting police into the National Assembly and laughing as they dragged out EFF MPs.

In debate on Zuma’s state-of-the-nation address, Maimane said the main cause of South Africa’s problems was that democratic institutions were undermined to protect a single man.

“This honourable man is in our presence here today,” he added.

“In these chambers just five days ago, you broke Parliament.”

Maimane said he was using the term “honourable” out of respect for Parliament and warned Zuma that it did not apply to him personally.

“Please don’t take it literally because you are not an honourable man. You are a broken man presiding over a broken society.”

He described the deployment of armed police to drag Economic Freedom Fighters MPs out of Thursday night’s joint sitting as an assault on the foundations of democracy, and Zuma’s chuckle after the incident as a insult to the country, reflecting the gulf between him and the nation.

“We will never ever forgive you for what you did on that day.”

Earlier on Tuesday, presiding officers Baleka Mbete and Thandi Modise defended the use of police to remove MPs from the National Assembly.

Opposition parties have condemned it as a violation of the constitutional separation of powers.