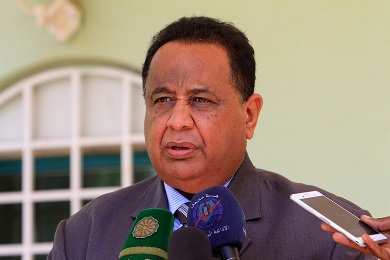 As part of efforts to restore peace in Dafur and Blue Nile states, Sudan’s foreign minister Ibrahim Ghandour has recently asked the United States Institute of Peace (USIP), and German institution for mediation, Berghof Foundation, to put pressure on the rebel groups in order to join the peace process.
International and regional mediators have been brokering different process to end Darfur conflict since 2003 and the conflict in South Kordofan and Blue Nile states since 2011.
Foreign ministry spokesperson, Ali al-Sadiq said that Ghandour discussed with a delegation from the USIP headed by the former US special envoy for Sudan Princeton Lyman, the peace talks in Darfur, South Kordofan and Blue Nile.
He told the official news agency SUNA that Ghandour asked the former American official “to participate in the government efforts to achieve peace,” calling on him to exercise pressure on the rebels to join the peace process.
Al-Sadiq added the meeting also discussed the situation in Libya, Central African Republic, Burundi and South Sudan as part of the USIP interest in the region.
The USIP is an independent, non-partisan institution established and funded by the US Congress to increase America’s capacity to manage international conflict without violence.
It does not participate directly in the American efforts to end the conflict but is known for making propositions and peace plans to end the different conflicts in the world and to advise the different administrations.
Meanwhile, Sudan’s presidential aide Ibrahim Mahmoud Hamid urged the German government to exert more pressure on the SPLM-N to seriously engage in the peace talks to end the nearly five-year conflict in the Two Areas.
On Saturday, Hamid met with the head of the German institution for mediation, Berghof Foundation, Theodore Murphy, in the presence of the German ambassador to Khartoum.
The Sudanese official who is also the government chief negotiator for the talks with the SPLM-N called on Germany to continue its efforts to support peace in Sudan and to pressure the SPLM-N to engage in “a fruitful and constructive dialogue”.
According to SUNA, the two sides discussed the outcome of the second round of informal talks between the government and the SPLM-N in Berlin, saying the former described the talks as “disappointing”.
Hamid further renewed the government keenness to promote ties with Germany, praising the support rendered by the German government to the peace process in Sudan.
Last month, the two warring parties concluded their second informal meeting in Berlin with no sign of progress toward an agreement ending the four year’s conflict in the Two Areas.
Sudanese government has used to reject Western intervention in the ongoing peace processes, but welcomes the German role to end armed conflicts and support democratic transition in Sudan.
The African Union High Level Implementation Panel (AUHIP), who brokers Sudan’s peace talks, and the German government are signatory of a strategic partnership agreement providing that the latter facilitates the on-going efforts to end war and achieve democratic transition in Sudan.