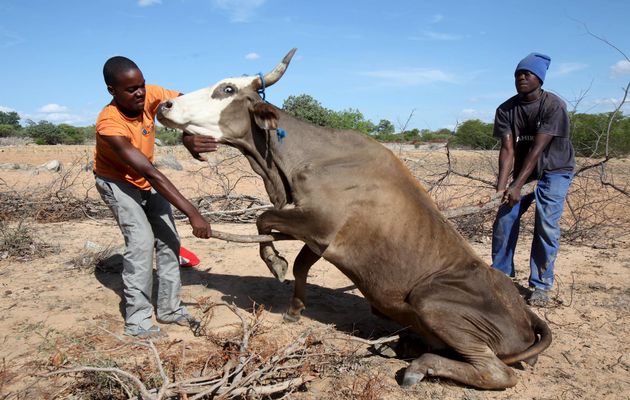 Zimbabwe’s President Robert Mugabe has recently declared a “state of disaster” in many rural areas hit by a severe drought, with 26% of the population facing food shortages.
A regional drought worsened by the El Nino weather phenomenon has affected South Africa and Zambia as well as Zimbabwe, leaving tens of thousands of cattle dead, dams depleted and crops written off.
Formerly known as the breadbasket of Africa, Zimbabwe has suffered perennial shortages in recent years and has resorted to importing grain from neighbouring countries to meet its needs.
“Initial indications were that 1.5 million people were food insecure with all the 60 rural districts being affected,” public works minister Saviour Kasukuwere said in a statement.
“Overall, the food insecure population has since risen to 2.44 million — 26 percent of the population.
“(With) the continued threat of the El Nino-induced drought, His Excellency the President has declared a state of disaster in regard to severely affected areas.”
Mugabe has blamed low farm yields on erratic rains due to climate change, as well as sanctions imposed by Western countries over the government’s tainted human rights record.
Critics say the food shortages have been partially caused by the president’s land reforms enacted since 2000 when the government oversaw the often violent eviction of white farmers.
Many farms are underutilised, and the government has vowed to hold an audit to ensure agriculture land is put to use.
Kasukuwere said at least 16,500 cattle have died countrywide, while as much as 75 percent of crops have been abandoned in the worse-hit areas.
He said the government would take measures to minimise the impact of the drought on both humans and livestock.