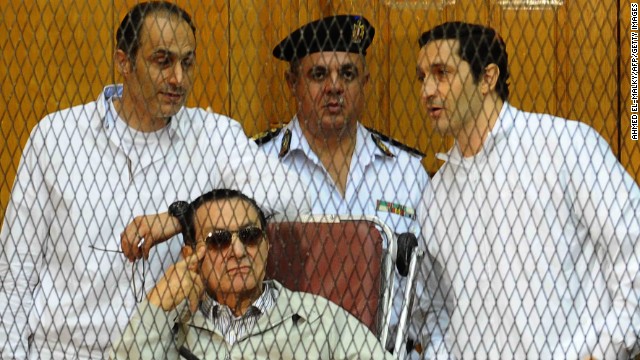 Former intelligence and national security officials took the stand in the hearing.

The autocratic strongman, who ruled Egypt for three decades with the military’s support, faces charges involving the killing of hundreds of protesters during the 2011 uprising that led to his ouster.

Mubarak was convicted on the charges last year and sentenced to life in prison, but appealed the ruling and was granted a retrial.

A court ordered him released in August and placed under house arrest while he awaits the retrial. A hearing scheduled for September was canceled.

Mubarak, 85, had been held since shortly after he was removed from power.

The ousted autocratic leader’s health has been a bone of contention during his trial and incarceration. He suffered a heart attack after relinquishing power and had said that he was physically unfit to stand trial.

He has since appeared to be alert at his court appearances.

Mubarak’s democratically elected successor, former President Mohamed Morsy, is scheduled to face trial in two weeks over the deaths of protesters killed during his own ouster.

Morsy and his Islamist Freedom and Justice Party, the political wing of the Muslim Brotherhood, had ridden into office in the wake of the popular uprising that pushed Mubarak out of power.

But Morsy became unpopular with many Egyptians who feared the he would institute autocratic Islamist rule.

Critics complained that the country’s new constitution was pushed through by a one-sided committee. Human rights groups criticized Morsy’s government over alleged human rights abuses, accusing it of hindering freedom of the press and keeping abusive structures in place from the Mubarak government.

But Human Rights Watch also said that the rights abuses under Morsy did not compare with those committed under Mubarak’s rule.

The deterioration of Egypt’s economy and a marked rise in crime and disorder contributed to the widespread dissatisfaction with Morsy’s government.

In a coup, Egypt’s military forcibly deposed Morsy in July after a popular uprising against him and has detained him ever since.

Multitudes of Morsy’s supporters filled the streets to demand his reinstatement into office. Hundreds have died in clashes with security forces.

In September, an Egyptian court banned all activities of the Muslim Brotherhood and froze its finances, drawing complaints from the international community.

The United States cut hundred of millions of dollars in military aid to Egypt out of protest over the coup against Morsy and the bloody crackdown on the Muslim Brotherhood and its supporters.