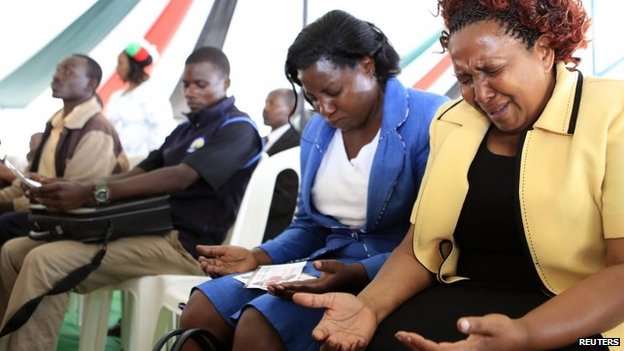 Those attending included workers from the Nakumatt supermarket, where some of the attackers barricaded themselves.

The prayers were hosted by Kenya’s Inter-Religious Council with clerics from different faiths, who sat together on a stage facing the congregation, calling for national unity, reconciliation and healing.

During the service in the capital, Nairobi, Bishop Gerry Kibarabara asked the congregation to stand, shake hands and say “peace”.We will not be intimidated”, President Uhuru Kenyatta said.

The prayers were broadcast live on all national television stations, with private broadcaster NTV labelling the transmission “United in Prayer” along with the hashtag #WeAreOne, which some Kenyans have been using on social media in response to the attack.

Adan Wachu, secretary general of the Supreme Council of Kenyan Muslims, said: “Islam is not terrorism and terrorism is not Islam. Islam is peace.”

Another religious leader said faith had been “misused” and the clerics on the Inter-Religious Council would fight such “misconceptions”.

President Kenyatta praised them for organising the prayers, which showed that “tolerance and mutual understanding are the cement holding” Kenyans together.

Faith “is one thing in 100 different languages, that’s why faith unites us”, he said.

e ended the service by saying that if al-Shabab fighters thought the Westgate attack would make Kenya withdraw its troops from Somalia, they were mistaken.

“Let me remind them that… for over 20 years as Somalis fought Somalis, all Kenya did was to offer refuge to citizens who fled,” he said, mentioning Dadaab.

“We went there to help them bring order in their own nation and will stay there until [we do], we will not be intimidated.”