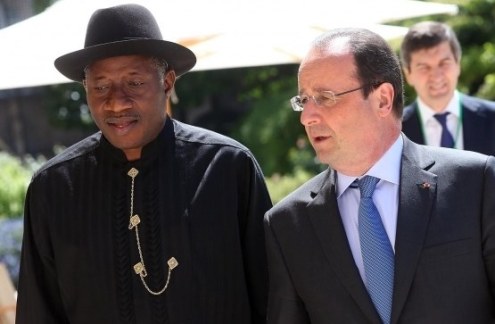 African and Western leaders have agreed to combine their intelligence information and defence mechanisms in a bid to reduce the security risk posed by Boko Haram and other terrorist groups.

African leaders meeting in Paris have pledged to wage war on Boko Haram islamist militants, suspected of having links with other terrorist organizations. The declaration of war comes after they adopted a regional plan to snuff out the religious sect that kidnapped more than 200 schoolgirls last month.

“We are here to declare war,” declared Cameroon’s president Paul Biya at the Paris security summit. Idriss Deby of Chad said it would be “total war”.

President Hollande of France, who hosted the summit, said regional powers had pledged to share intelligence and co-ordinate action against the group.

He called Boko Haram a “major threat to West and Central Africa”, and said it had links with al-Qaeda’s North-African arm and “other terrorist organisations”.

West African countries have promised help in the form of surveillance patrols and military equipment, alongside expert advice from Britain, France and the US.

Boko Haram has been blamed for causing 2-thousand deaths this year, and most recently abducted more than 200 schoolgirls.

Meanwhile, just hours ahead of the summit, suspected Boko Haram fighters carried out another attack, this time killing one Chinese worker and kidnapping 10 others in Cameroon, which has faced growing attacks from the islamist militants.

Two Italian priests and a Canadian nun are still missing after being kidnapped in northern Cameroon in April, months after a French priest was seized.