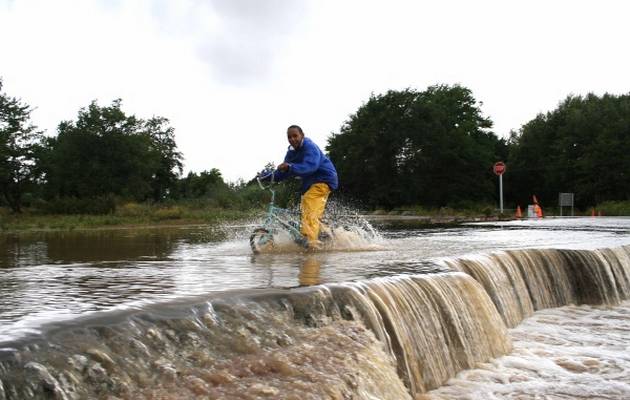 Paidamoyo Chipunza — ands and Rural Resettlement Minister Dr Douglas Mombeshora and many others from his neighbourhood in Borrowdale Brooke, Harare, yesterday woke up to massive destruction and flooded homes.

When news teams visited other areas located along Crowhill, several people were still to come to terms with what had hit them. Secretary for Local Government, Public Works and National Housing Engineer George Mlilo says over 2 000 houses have been affected in Chitungwiza and Harare due to the floods.

Rains partially destroyed Dzitika Bridge in Honde Valley, forcing motorists and pedestrians to share a single lane. Fears abound that the remaining part of the bridge could collapse if rains persist.

Motorists using the Hauna-Sagambe Road could soon face a predicament if rains continue to pour out and disrupt the construction of Dzikita Bridge which was partially destroyed by rains.

The single lane being used by motorists and pedestrians is already giving in as it was also damaged and huge cracks have already developed posing yet another serious disaster.

Councillor for Ward 5 Mr Maxwell Tsarukanai and villagers from Muparutsa area described the incident as unfortunate. District administrator for Mutasa Mr Tendai Kapenzi said the disaster was a result of stream bank cultivation which had reached alarming levels in Honde Valley.

Mutasa Rural District Council chief executive Mr George Bandure, who was part of the team that visited the damaged bridge said the disaster was so serious and required collaborative efforts.

In the Borrowdale case, families were left stranded while property worth tens of thousands of dollars was destroyed following heavy rains that pounded Carrick Estate as the Civil Protection Unit warned against any activities along the flooded Manyame River.

Mr Enock Gede, a resident, had his vehicle swept away for about 500 metres from his house into Mubvinzi River, with his property flooded. Other residents lost household property.

Trees were uprooted, a bridge was swept away, pre-cast walls collapsed while the floods also swept away crops and livestock. Dams were reportedly spilling, resulting in fish being found along riverbanks. Most children downstream failed to go to school because of the collapsed bridge. When The Herald visited the area yesterday, residents were speechless.

“We had to take cover in the ceiling as the water kept flowing in the house and the water level rising. Outside, it was windy with thunder and heavy rain, so we could not get out,” said Mr Gede.

“I had never seen such rains in my life and we have never experienced such flooding in this area,” he said.

In the morning, Mr Gede woke up to find his car missing. “With the assistance of neighbours, we searched around and found it about 500 metres away from the house tucked in between trees and facing the river,” he said. Another resident, Mr Andrew Pahwaringira was still in shock.

“The water was just too much and we still believe there could be a dam which collapsed upstream resulting in the increased flow of water. We saw fish scattered along the riverbanks and there are many people who do fish farming around this area,” he said.

While CPU spokesperson Ms Sibusisiwe Ndlovu said no similar reports or casualties were reported, she urged people living and farming along Hunyani River to stop all activities forthwith as the river was in flood.

In a statement released yesterday, CPU said flooding of Hunyani River was expected to continue up to the end of the rainy season. “Hydrological reports indicate that all the dams on this river system have been spilling for about two weeks now.”

The dams include Chivero, Darwendale (Manyame), Seke and Bhiri. She said the catchment area of Hunyani River has so far received up to 200 percent of normal rainfall, hence the ground was soaked and there was high run off even with what appeared to be insignificant rains.

Ms Ndlovu said the built up areas in Harare and its satellite towns drain into Hunyani and further contribute to its high run off.

“The river is not only in flood but is also characterised by swift currents. These currents are strong thus can easily drag and sweep away people, canoes and anything that ventures into the river. A number of people have been marooned and some have been swept away,” she said.

The CPU warned against attempts to cross flooded rivers and urged people to desist from any activities on the river downstream. “Communities with equipment such as movable water pumps downstream of major dams are urged to remove the equipment to avoid losses and everyone living near rivers must be on high alert.”

Meanwhile, the Meteorological Services Department (MSD) has warned of heavy rains countywide that are expected to intensify from Saturday to Tuesday next week. The MSD senior forecaster, Mr Tich Zinyemba yesterday called for more vigilance and preparedness, particularly for rescue operations by those responsible.

“Despite these warnings and advisories, reports of drowning are a serious cause of concern. Let us all collectively take these alerts seriously, more so between now and the middle of February,” said the MSD.

Mr Zinyemba said the present rain situation was a combination of the presence of the Inter Tropical Convergence Zone and a frontal cloud system which entered the country through Matabeleland Provinces. “Added to this combination is the heating around midday which further enhances rainfall activity,” he said.