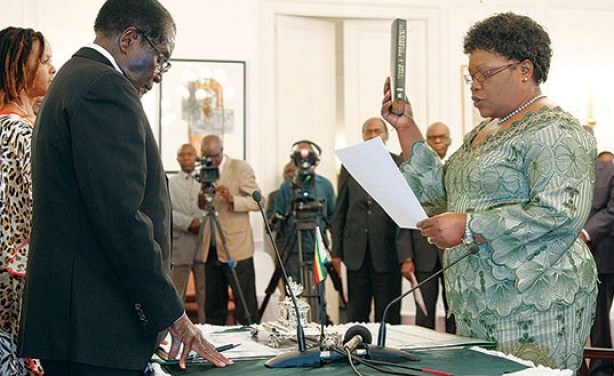 VICE-PRESIDENT Joice Mujuru is working with the MDC-T to dislodge President Robert Mugabe from power, a Zanu PF MP said on Sunday.

Justice Mayor Wadyajena, the MP for Gokwe-Nembudziya, told thousands of Zanu PF supporters at the weekend at Tsunga growth point that Mujuru must go as she was now a threat to Mugabe’s rule.

Wadyajena said suspicions that Mujuru was working with the MDC-T were confirmed by the party’s leader Morgan Tsvangirai while opening his party’s congress in Harare last weekend.

“I am not the one who said so, the MDC-T leader himself, Mr Tsvangirai or whatever they call him, yesterday (Saturday) said he was working with some moderates in (Zanu PF) to remove President Mugabe,” he said.

“This just confirms what was said by the First Lady (Grace Mugabe) during her countrywide rallies. We cannot have a mixture of groundnuts and rats in the same house, no.”

Wadyajena, widely believed to be a member of the Emmerson Mnangagwa faction, said the statement by Tsvangirai should make party members more conscious on who should be in positions of authority and a possible candidate to take over from Mugabe when he leaves.

“President Mugabe must rule forever. Those who want his post must go and hang themselves, Zanu PF is not a shopping mall where people can buy posts for their personal gain.

“We have some in our midst who do not have the interest of the people at heart and they go about on a self-aggrandisement drive. Let us not associate with such characters,” he said.

Zanu PF is set to hold a watershed elective congress where fireworks are expected with the fate of Mujuru at the assembly being under spotlight after First Lady Grace Mugabe called on her to resign last month.

“Let us just compare and contrast what was said by Tsvangirai yesterday (Saturday) with what was said by the First Lady in Mashonaland Central, Mashonaland East and at her meeting with war veterans and you will know the truth regarding some of the leaders in our party,” he said.

Wadyajena said MDC-T MPs cheered as Mujuru entered parliament and heckled Grace Mugabe last month in yet another sign that the two parties were now working together to oust Mugabe from power.

“Dr Mugabe never lied when she said that the vice-president is working with the opposition. This confirms it all,” he said.

During the address Wadyajena lambasted party spokesperson, Rugare Gumbo, saying he must stop labelling party cadres who are “defending the president” sell-outs.

“We know that Gumbo has a history of rebellion way back in the liberation struggle. He is one person who must not talk about rebellion. He now has a tendency of labelling anyone who supports the First Lady a rebel,” Wadyajena said.

“These people have rebelled against the president and we must not vote for them at the congress. The party has banned vote-buying and if anyone here in Gokwe North is caught doing that, we don’t care who sent you, the party will fire you immediately.”