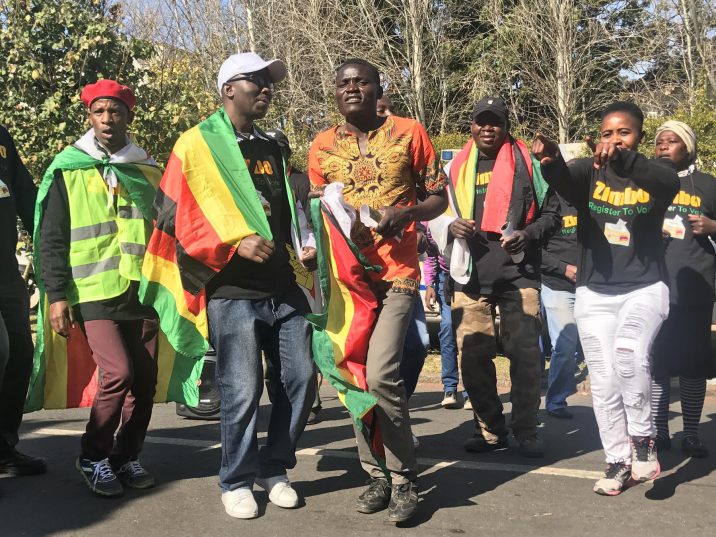 Scores of Zimbabweans living in South Africa have recently stormed the Zimbabwean embassy in Pretoria, demanding the right to vote in the 2018 general elections.

According to News Day, the protesters first gathered at the Union Buildings before proceeding to the Zimbabwean embassy to present their petition.

Part of the petition read: “The reasons for the march are that the Zimbabwean government should allow and facilitate that all Zimbabwean citizens living here vote within South Africa, allow freedom of speech before, during and after the elections, allow fair and unbiased media coverage of all presidential candidates, stop the various human rights violations by the Zanu-PF militia and police, particularly in rural areas during this election period and beyond.”

Reports late last year indicated that Zimbabwe’s three million or so diasporans were most certainly not going to be allowed to vote in the upcoming elections unless they came home twice – once to register and then again to vote.

The state-owned Chronicle newspaper at the time quoted Rita Makarau, the head of the state-aligned Zimbabwe Electoral Commission as saying: “People in the diaspora will be allowed to vote as long as they come back to Zimbabwe on voting day and can vote in their wards.” She had previously said that a new biometric voters’ roll would have to be set up next year that will require people to register in person.

She had also indicated in the previous month that there were “no funds” for a diaspora vote.

President Robert Mugabe’s government has been none-to-keen to allow Zimbabweans based outside the country to vote, considering that a fair number of them may be supporters of the opposition Movement for Democratic Change (or other parties).

Zimbabweans’ great exodus to South Africa and beyond picked up the pace during the post-2000 crisis, though it has been going on for decades. Zimbabwe only has around 6.6 million registered voters at home.