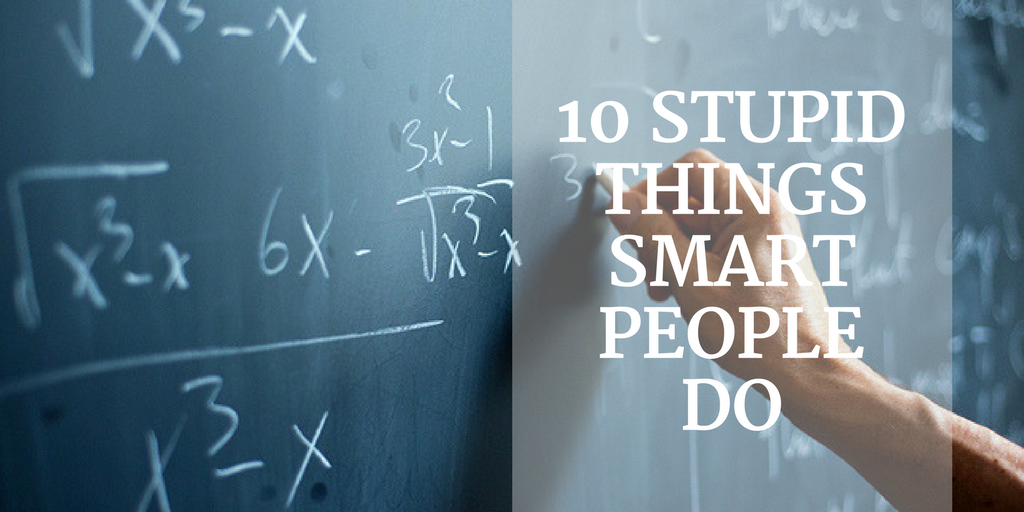 We have encountered them time and time again—at home, at work, and at school. Everywhere you go, you meet them: intelligent people who do stupid things. They are intellectually gifted; their brilliance leaves you in awe, but so does their capacity for stupidity. Smart people who do stupid things are a part of everyday life. Below are ten things they do that make them look dumb:

(1) They believe consciously or subconsciously that they know everything. As a result, they don’t believe anyone can teach them anything, which keeps them from learning what they need to in order to succeed. Wisdom is often hidden in the least likely places and people. If you lack humility, you will miss it, and if you miss it, you will miss your success.

(2) They believe they are always right. Because they have gotten it right so many times before, they begin to believe they will never get it wrong. Mathematics and science may be predictable, but life is not.

(3) They believe they are entitled to success because of their intelligence. The richest people in the world don’t have PhDs, and neither do the greatest inventors and artists, which causes them to be bitter. Life rewards us for what we create, not what we memorize.

(4) They ignore instinct. Trusting their knowledge but devaluing their instinct, they seldom rise to the top. But, instinct is what separates winners from losers when two people have the same amount of knowledge.

(7) They don’t work well in teams. Because they highly value their own opinions, they find it difficult to make room for anyone else’s. They are committed to the glory of their own intellect.

(8) They don’t take criticism well. Used to only receiving praise, they don’t take feedback well, even when it is constructive. Instead, they take it as an attack on their intelligence.

(9) They underemphasize social skills. In many academic institutions, social skills are not emphasized, much less taught. You never had to work hard to get an “A” for being polite, friendly, or gracious; therefore, you lose on the benefits of emotional intelligence.

(10) They overemphasize theory. Theory is good, but it cannot be used in some real-life situations where practicality offers the only solution.