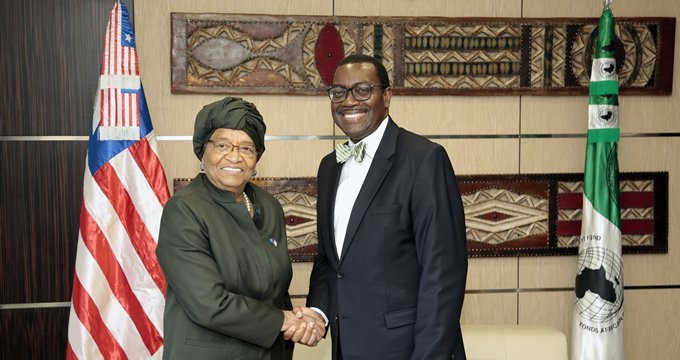 Dr. Akinwumi Adesina, the President of the African Development Bank Group (AfDB), recently confered with the Order of the Star of Africa with the Grade of Grand Band of the Republic of Liberia. The investiture ceremony was hosted by the Liberian President, Ellen Johnson Sirleaf, at the C. Cecil Dennis Auditorium of the Ministry of Foreign Affairs, in Monrovia, Liberia.

Dr Akinwumi Adesina thanked the President of Liberia, and the Liberian Government for finding him worthy of the award. In his words, “On behalf of the African Development Bank, I am deeply honored to receive the Order of the Star of Africa, Liberia’s highest distinction,” said the President of the premier African financial and development institution before an audience of members of the Government, high-ranking accredited ambassadors and diplomatic staff.

“I would like to personally thank President Ellen Johnson Sirleaf, the jewel of Africa. When I took over as President of the African Development Bank in 2015, President Sirleaf became an important ally in our High 5s strategy to; Light up and power Africa, Feed Africa, Industrialize Africa, Integrate Africa, and Improve the quality of life of the people of Africa. She had already begun focusing on these development priorities in Liberia, decades earlier as Minister of Finance and more recently as President,”

The award honors Dr. Adesina’s visible and tireless commitment to the rapid economic development of Liberia through, among others, the implementation of the Bank’s first and second priorities. Dr. Adesina was a former minister of Agriculture in his home country of Nigeria. His tenure saw the development of growth-friendly agricultural policies, the most notable was the transparency in procurement and distribution of seeds and fertilizers to rural farmers.