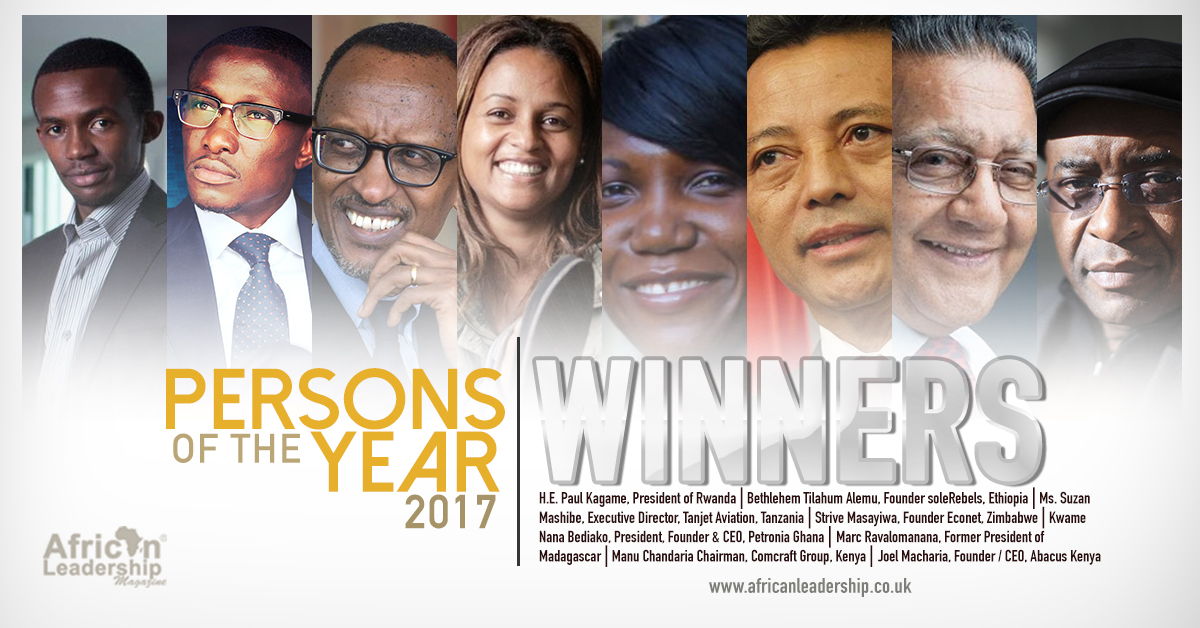 United Kingdom
January 5, 2018
The African Leadership Magazine Persons of the Year Awards committee has unveiled the winners for different categories in the just concluded polls for the African Leadership Magazine Persons of the Year Awards 2017.
The winners who shall be decorated on the 24th February 2018 in Johannesburg, South Africa, were unveiled by the Publisher of the Magazine Dr. Ken Giami, at the UK Head Office of the group, after the awards committee working with the editorial team concluded the collation of both online and offline votes and submissions from the over 1 million subscribers/followership base of the publication.
The winners are:
African of the Year 2017:
H.E. Paul Kagame, President of Rwanda – Winner
African Female Leader of the Year 2017:
1.Bethlehem Tilahum Alemu, Founder soleRebels, Ethiopia – Co-Winner

It was a record year for African Leadership Magazine Persons of the Year awards as total online votes cast by Africans from all around the world jumped to 288,958 from 85,000 the previous year, and offline submissions by over 400%.
In addition to the winners, a special Commendation citation shall be presented to the most distinguished runners up, which includes Linah Mohohlo, Governor, Bank of Botwana; Fred Swaniker, Founder, African Leadership Academy, South Africa & African Leadership University, Mauritius;  and  Tony Elumelu, Chairman, Heirs Holdings Nigeria.

The Publisher of the Magazine, Ken Giami, reiterated the group’s position, that all nominees in the various categories are all winners, given their individual contributions to the continent’s growth and development. In his words, “to be chosen out of the over 1.2 billion people on the continent, speaks volumes.” He further stated that” the nominees have elevated and redefined benchmarks of service to the humanity on the continent. They are all true lovers of Africa, contributing passionately, sometimes imperfectly, but all determined to impacting society, making Africa a better place for its people. ”
The African Leadership Magazine Persons of the Year which is in its 6th run is an annual award reserved for distinguished Africans, who are considered to have blazed the trail in the year under review. A shortlist of nominees are selected from results gathered via a Call for nomination – traditionally promoted via a paid online and offline campaigns across the continent, Europe, and the Americas. The call for nomination is the first step in a multi-phased process. Remarkably, this year, the selection committee considered, among others, three key themes –  Africans whose activities, policies and actions have contributed to ‘creating jobs & wealth creation; promotion, defense and delivering of democratic values; & the promotion of Africa’s image globally’; in arriving at their decisions. With Africa’s population tipped to double by the year 2050, and unemployment at the center of the problems confronting the continent, jobs and wealth creators deserve to be especially encouraged and supported.
Past recipients of the prestigious African Person of the Year Awards have included Dr. Mo Ibrahim, founder, Ibrahim Prize for Leadership, 2010; Liberia President Ellen Johnson Sirleaf, 2011; H.E. Atiku Abubakar, former Vice President of Nigeria  2012; Xavier Luc-Duval, Deputy Prime Minister of Mauritius & Minister of Finance (2013) H.E. President Jakaya Kikwete, former President of Tanzania, 2014; His Excellency President Goodluck Jonathan, former president of Nigeria, 2015; Mr. Mo Dewji, CEO, MeTL, Tanzania, 2016.
About African Leadership Magazine:
The African Leadership magazine is published by African Leadership (UK) Limited, a company registered in the United Kingdom (Company No. 07435198). The magazine focuses on bringing the best of Africa to a global audience, telling the African story from an African perspective; while evolving solutions to peculiar challenges being faced by the continent today.
Since its maiden edition, African Leadership Magazine has grown to become a leading pan-African flagship leadership-focused publication read by over 1, 000, 000 targeted international investors, business executives, government policy makers and multilateral agencies across Africa, the Middle East and Asia, Europe and the US. It is distributed at major international and African Leadership events around the world. The magazine has over 800,000 subscribers/Followers on Facebook and a virile readership on other social media platforms. It is a niche and unbiased African voice born out of a desire to ameliorate the lot of Africans by focusing on individuals and corporate bodies that are known for their legacy-based approach to leadership. We believe in building sustainable leadership in Africa through the exchange of ideas in tandem with global best practices.
The magazine shall continually seek to herald the dawn of a new Africa as the continent of promise and global leadership, championed by people of integrity and resilience who are rising from the challenges of an unpleasant past; thereby preserving a legacy for future generations of Africans.