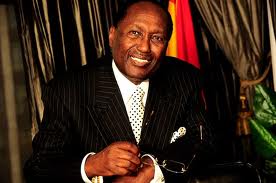 Dr Chris Kirubi is the quintessential Kenyan entrepreneur. A self-made businessman, he rose from poverty to create a multi-million dollar empire of property, investment, manufacturing and media companies.

Today, he is well-known both in Kenya and internationally. Kirubi is the chairman and a shareholder of Haco Tiger Brands (a joint venture with Tiger Brands SA, listed on the Johannesburg Stock Exchange). He is also CEO of Capital FM and holds large equity stakes in Nairobi Stock Exchange listed investment firm Centum, UAP Insurance and the Kenyan franchise of DHL. Furthermore, he is a shareholder in Nairobi Bottlers, a bottling franchise for Coca-Cola.

Kirubi is remarkably taciturn about his past. “There is not much history. I was born a poor boy – an ordinary peasant, I would say. My parents passed on when I was young. But I was lucky to have people who supported my education,” he says. His first jobs helped him develop a sense of selfreliance.

“When I was in school I worked during holidays to help myself and my brothers. My work experience therefore started many years ago. It builds confidence. It gives you experience as well. It teaches you at a very early stage how to take care of yourself. You learn a lot of discipline – how to manage your time, how to be transparent – and this was a good base for doing my own business. I apply this to whatever I do.”

After high school, Kirubi took up his first formal job with Shell as a sales rep. He moved swiftly through his graduate studies and positions in the pharmaceutical industry, the automotive industry and government before deciding to begin a new journey.

Building on a Property Foundation

That journey began with property development. Kirubi owns one of Kenya’s most iconic buildings, the International House in Nairobi – namesake and headquarters of International House Limited, his property investment firm. “Property was one of the easiest things to try to get into,” Kirubi explains. “Properties were not expensive as they are now. Today in Kenya it is almost impossible to buy. Back then, if you had a friend in the bank to support you it was easy to buy these assets. I used to buy neglected properties, do them up and flog them in the market. It was an area that there were not many people involved in, and it was a very profitable venture.”

Does he believe property is the backbone of his success? Not strictly. “It was a combination but property was where I began. I started on a good footing,” he says. “I was asked by a company to partner with them in manufacturing writing implements and was also trading with a Dutch company. But I got involved with the Dutch company because the MD stayed in one of my properties.

We got to know each other and became good friends. With International House, I worked for [the insurance company that was headquartered there]. I used to sell policies and when they decided to close down their offices in Kenya, they offered me the opportunity to buy the building and supported me in talking to the banks and off we went. So property was always the foundation.

From there, Kirubi built a diversified empire, and recalls only one defeat – a paint industries business. But even on the topic of failure, Kirubi is characteristically upbeat. “I didn’t understand the routes to market and couldn’t gain ground against the giants in the sector. But I learnt: you fail, you get up and you walk. You move on. I had the proceeds from the assets and some land that I still hold, so it wasn’t a total disaster,” he says.

His successes have been plentiful and on this point Kirubi can afford to be a little philosophical. “Success for me is not enumerated in wealth,” he says. “I have come to discover that money and material things are never quite sufficient; the goal post always shifts when you get there.” He returns to his typical pragmatism: “Success means being able to accomplish the goals I have set out for myself. If, for example, I have a goal to build a state-of-theart property, success comes in small doses. It is in seeing the milestones we have achieved with completion of every construction step and finally being able to open up the building for occupation. More so, it extends to having a 100-percent occupancy rate of satisfied clients. When that happens, I can say I feel successful in that angle.”

His biggest success, he believes, was his transition from a position of poverty to that of employer, shepherding himself ”from the very poor world to a world where I am able to create jobs and create opportunities” for fellow Kenyans. “My success is Kenya’s success. I have lots of people working for me in the various companies I have. From being poor, I am now a job creator, creating lives for other people.”

Kirubi has developed a reputation for turning around failing businesses, Capital FM being an exemplary case. “Capital FM was almost dead. They were not paying their bills, the staff was demotivated. It was struggling in the market place,” Kirubi says. “But I saw an opportunity. I realised that what was missing was focused management. The company was concentrating on a narrow band of expat listenership.”

The beleaguered radio station might not have seemed a viable investment to many, but to Kirubi it was an opportunity. “I like buying things that are not well managed and turning them round, because I know the one thing I can put into a business is management. Within a few years, we turned it around, widened the base of listenership, brought in younger Kenyans to be presenters and I myself went on air – I got involved to make sure that people had contact with me.”

The opportunity was twofold. “I really thank Capital very much because I had lots of products to promote and I was paying a lot of money in advertising. So I thought, why don’t I buy the media itself?” he says jovially, before adding on a serious note: “It became my life. When you get into media, it’s hard to get out.”

How has he managed to build success in so many diverse sectors? “Regardless of the sector, being successful requires first and foremost that you understand your market,” he answers. “When I first got into media, I faced numerous challenges in trying to understand the market, its needs, the skills required and the peculiarities of the industry. I had to do my research and practically submerge myself in the industry by becoming a DJ in order to understand the market. Only then could I make proper and effective decisions.”

Knowing your market is just one item on a shopping list of attributes and virtues that Kirubi feels help create success. “You need to have a vision, be passionate about it, build a credible brand and have tenacity, especially when the trials seem to be more than the successes,” he advises. “Obviously this list is not exhaustive but success requires you to put in hard work.”

His involvement in Capital FM took Kirubi into the brave new world of digital media, which has captured him completely. “This to me is a very exciting world. I have about three million hits a day on Capital FM. The future is new media. It is instant, it is specific and everybody can talk to everybody else. New media is very fast. You are not waiting for news at 10 at night,” he says. “Businesses have to change. They have to see communication as a major issue. They have to understand who is saying what about them, and to be aware of negatives and correct them, or their businesses will disappear beneath them without them knowing what is going on. [New media] has brought customers to the forefront. People have the power now to communicate.”

Kirubi’s use of social media and his show on Capital, which he presents as DJ CK, have raised his public profile as an outspoken advocate for entrepreneurism and entrepreneurs. His Twitter account (@CKirubi) has nearly 100,000 followers, many of whom use the hashtag #AskKirubi to solicit his guidance.

“Yes, I engage with many aspiring entrepreneurs. In fact, I have always advocated for self employment as a means to curb the skyrocketing unemployment levels in Kenya. Young people shouldn’t just wait to get absorbed into the formal employment sector but must look at alternative ways of generating income,” Kirubi says.

According to Kirubi, the issues that keep young entrepreneurs awake at night include cash flow, access to financing, competition in the market and the market’s relative demand for their offerings. At least, those are the issues they frequently ask him about. “What I always assure them is that for the most part, there is nothing new under the sun. Your proposition is not a ‘eureka’ one. It is more likely an offshoot of an old solution adapted to evolving challenges. As such, many other people have gone before you and encountered the same problems. One of the best ways to counter these problems is to get a business mentor and if possible, allow yourself to be incubated until you feel you can stand on your own two feet.”

Online mentoring allows Kirubi to combine two of his passions: entrepreneurism and Kenyan youth. “There is much that I do behind the scenes but I remain most passionate about young people,” he says. “In fact, I have made it my life’s mission to belong to them. For me this means understanding how young people think, what matters to them and seeing how best I can influence positive change. The truth is that ‘youth’ remains a most sought-after commodity – but it is also a very trying time because they have not quite concretised their identity. I am passionate about inspiring them to become who they want to be, in line with what matters to them. There are no limits to what they can perceive and consequently achieve.”

Chris Kirubi looks to global business icons for his own inspiration. “I am inspired by successful moguls like Richard Branson and Donald Trump,” he says. “These are individuals who are able to overcome their own personal hurdles, actively seek out new territories to conquer and actually excel despite others not believing in them. They are unconventional in their thinking and lifestyle, take huge risks and as a result have created huge empires from their personal brands. I identify most with them but I am also very driven. In my personal life, I am inspired by my family and the fact that I have this talent, for which I must be an excellent steward. I do not take my abilities for granted.”

Chris Kirubi – Where to Next?

Will he ever retire, I ask? “Retire to what, madam?” he answers. “I don’t go on holiday. I am always on holiday. I believe in working. I love my job, I love what I do –that’s my life.”

Motivated by his ongoing opportunity to transform Kenya’s economic landscape, Kirubi says he wakes up every day and asks himself what he can do to make his country the place of his dreams. “As a member of the original team tasked with putting together Vision 2030, I was inspired by the possibilities of what we could become, and this vision still motivates me to date. I want to be at the centre of positive change in Kenya, regionally and beyond. I want the world to know that when something good happens in Africa, it is not by accident. We have put in more than a fair share of personal and collective effort. It is Africa’s turn to rise and shine.”